I haven’t complained  about the amount of squash coming out of my garden. That would be silly. Fresh, almost-free, organic veg is great! But we’ve had a LOT of squash. I’ve been getting all kinds of creative with the zucchini, but for the yellow squash this is one of my favorite recipes and we almost never get tired of it. Warning: This is a Southern-style recipe (and what I mean by that is that we take something superficially healthy–squash!–and do our bests to load it up with tasty stuff that isn’t so healthy).

Healthy or not, this recipe is easy and tasty. Here goes! 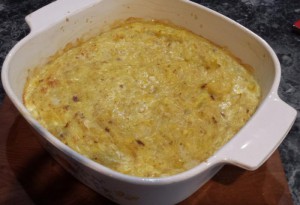 Here’s mine – I forgot to add the breadcrumbs on top this time. Still tasty!

END_OF_DOCUMENT_TOKEN_TO_BE_REPLACED

Comments Off on Squash Casserole Recipe

I avoid turning the oven on in the summer, but we get just the tiniest bit of fall weather, and immediately I roast a chicken. Now, I have a little bit of chicken left—Not enough for another meal but more than enough to make me feel guilty if it goes to waste. So, how can I stretch it out into another meal Bones will be happy with?

I’m from the South, and it is fall. I’m thinking chicken and dumplings will hit the spot!

I start by making a stock from my leftover chicken. 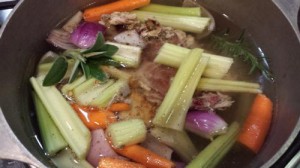 Stick the whole chicken carcass in a stock pot.

This was a relatively small chicken, and we’ve eaten most of it, so I go light on the other flavors for my stock. I add:

Don’t worry about chopping everything up too much. This is just for flavor.

I’m using up leftovers and just feeding Bones and myself.  If you’re feeding a family, or starting with a whole chicken, you’ll need to double or triple the above.

Add enough water to cover everything and heat on high until the water just starts to boil. Immediately turn it down to where the stock is just simmering. A rolling boil is not your friend for stock.

If I were a real cook, I would baby that thing along by skimming it every half hour or so. Since I’m inherently lazy, I leave it on the stove, go back to my office and pretend to work.  Every now and then I go turn the chicken over with a pair of tongs. When the chicken falls apart instead of turning, I know it’s done. In addition to making a tasty stock, the chicken has now deboned itself. See? Lazy.

Remove from heat. Pour the stock through a colander to separate out solids. You’re going to be using your hands for the next part, so let it cool for a bit. If you want to hurry things along, stick the pot in an ice bath before straining.

Ideally, you will now put the stock in the fridge overnight so you can easily skim off the fat the next day. If you want supper tonight, just let it settle, skim as much fat as you can, and carry on.

Now retrieve your chicken. Separate the meat from the bones and veg and set aside. I feed the carrots and safe bones to my pups. They watch that stock pot way more closely than I do because they know they are in for a treat later. If you want, you could leave the carrots for the stew, but since they are so soft, I like to start with some fresh ones.

Grab your stock pot again and heat a few tablespoons of oil. Add:

Cook until the onions are soft. Add:

You can also add some flour here for a light roux, but I’m going to be a little weird and add thickener later.

Pour in the rest of your chicken stock.

You’re going to let this simmer for a while until the carrots are your desired tenderness.

If you have more than a passing acquaintance with chicken and dumplings, you’ll know that there are two basic kinds of dumplings. One kind is a drop dumpling, and is really light and fluffy (yum!). The other is a more traditional southern rolled dumpling. It has a little more backbone. (Okay, okay –  they can be a little chewy). We’re actually going to make the second kind, because that’s the kind my mother and little country grandmother made. There’s no flavor like nostalgia.

Here’s what you’ll need (this is actually a ½ recipe for our leftover portions):

Combine the flour, baking powder, and salt. I like to add a little chopped sage at this point, too. Cut in the butter. Add the milk and egg. Mix until well blended and you can form into a ball.

Turn out onto a floured surface. Flour you hands and knead for a few minutes until the dough is pliable. Keep adding flour as needed to keep from sticking.

Roll out the dough very thin. Cut into small rectangles. If you have a pasta cutting wheel, it’s great for this. Otherwise a knife is fine.

Now let’s go back to our stock. First, dump in your

from earlier. Now I’m going to thicken just the tiniest bit. Put a tablespoon of flour into a small jar with about 1/3 cup milk. Shake until combined and pour into the stock. If you like a thicker stock, your options are go back in time and make a roux, use more flour, or dump in a can of condensed cream of celery soup. Don’t forget that the dumplings are actually going to thicken it a little, too.  Don’t get carried away with the thickeners!

Now taste your stock and adjust the seasoning. The dumplings are going to add a little depth, so don’t worry if doesn’t seem quite right yet.

When you’re ready, bring the stock back up to just boiling. Add the dumplings one at a time.

The first time I made dumplings, I panicked at this point. You’re quickly going to run out of surface area to add more dumplings. The trick to adding more without them sticking together is to push the dumplings around with your spoon until they are completely covered in stock before dropping more on top.

Cook until the dumplings are cooked through. It’s pretty quick, maybe five minutes.

And now we’ve turned a tiny little bit of left-over chicken into a hearty dinner for two that Bones will love! 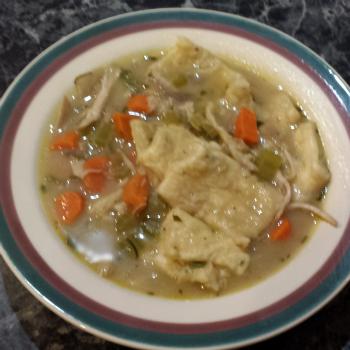 Comments Off on Left-Over Chicken and Dumplings Recipe for Two