Hey, hey everyone. Today you have two Irenes for the price of one! We have other things in common, which you’ll probably figure out shortly. (Honestly, do I ever make anything without a substitution?) Irene Vartanoff has brought a delish salmon salad recipe and an excerpt from Captive of the Cattle Baron. My contribution to this post is eating the yummy salmon while I enjoy the excerpt… 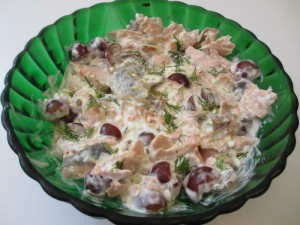 I find recipes on the net by googling them, and then I copy down the ingredients and maybe a few direction. Sometimes I don’t copy very well. That’s how I ended up making a Substitution Salmon Salad that I adore.

I never, ever follow recipes exactly although I always mean to. After I found a salmon salad recipe online that didn’t have any ingredients I dislike or that dislike me, I went shopping for them. That’s where the substituting began. I wasn’t about to buy the dry mustard the recipe called for, not when no one in the house eats dry mustard. My husband always has some Gulden’s Spicy Brown Mustard around, so I figured I could use that. Substitution Number 1. The recipe called for chives. By the time I got to the grocery store, I thought I was supposed to buy dill. Oops. Substitution Number 2. END_OF_DOCUMENT_TOKEN_TO_BE_REPLACED