Okay, all great, except all my recipes start with browning the meat. So I consulted Mr. Google. There are tons of vegetarian chili recipes, but none looked quite like the type of chili I would normally make at home. So…. I started from scratch. I’m experimenting on y’all.   Here we go… END_OF_DOCUMENT_TOKEN_TO_BE_REPLACED

Macarons are all the rage these days. I’ve found them popping up everywhere, even in the wilds of central Texas. Lucky, lucky us, we’ve got Jessica Cale with us today to share a recipe. And…Oh. My. Goodness. Look at them! Mouth-watering. These are a must-try for my next special occasion!

Make sure to scroll down and check out Jessica’s fantastic new historical romance, Tyburn. Also, I’ve got a rafflecopter give-away for a $25 Amazon Gift Card going on through March 10. 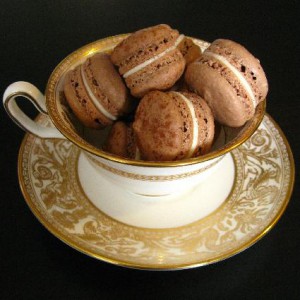 I love macarons. These gorgeous little French cookies are light, delicious, and you can make them in any color or flavor you can imagine. With Valentine’s Day coming up, I’m sharing the recipes for my favorite flavors and one of those is Chocolate & Bailey’s. I made these this weekend with my friend Jen in mind. Hot chocolate with Bailey’s in it was always our go-to drink in University and these indulgent macarons have the same taste with fewer calories (unless you eat them all. Not gonna lie, it could happen). Word of warning? They do take a little bit longer to make than hot chocolate…

Making macarons can be a little tricky at first, so before you start, I would really recommend looking up some tutorials so you know what everything is supposed to look along the way. Food Nouveau has one here that is incredibly helpful with extensive tips and a great troubleshooting guide. The Cupcake Project has another one with some great pictures here.