Tag Archives: A Taste of You 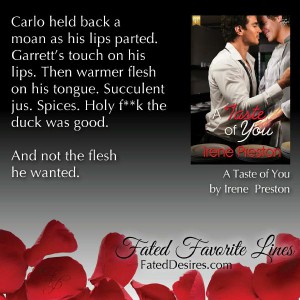 A Taste of You: Release Week Appearances

It’s release week for A Taste of You – pre-order now and it will be on your e-reader when you wake up tomorrow!

“You want dinner? There’s plenty.” Carlo put a slab of prosciutto on the counter and began shaving off slivers of meat.

Garrett watched Carlo’s big hands expertly gliding the knife through the cured meat. Carlo mostly stayed out of the kitchen at Ransom. Garrett sometimes forgot that his partner was the product of four generations of Rotolo restaurateurs and an accomplished cook in his own right.

The aroma of cured ham filled the air, rich and sweet, exactly the way the meat would taste.

His imagination automatically took him further, looking for flavor combinations, but all he could think about was the way Carlo’s fingers would taste after touching the meat. He imagined drawing them into his mouth slowly, sucking the sweetness off warm flesh.

Here is where I’ll be this week:

I decided against a huge blog tour, but I am popping in a few places around the web.

Release Day Chat with the Fated Desires Book Club03/10/2015 7pm-8pmWe’ll talk about A Taste of You, men, cats, food, and whatever else you want. There will most likely be giveaways!This is a book club exclusive event – just join here!

Author Interview by Molly Lolly 03/10/205Molly asks me about my writing process. I pretend I have one.

Comfort Food 03/11/2015Character panic! My hero might not be lovable!?! I should probably keep that to myself – instead I blog about it at Because Two Men are Better than One

I’ll also be updating review excerpts and links here as they come in, if you want to see what others think of Carlo and Garrett.

Learn More About A Taste of You

Blurb | Read a Chapter | What People are Saying

Comments Off on A Taste of You: Release Week Appearances

Tagged as A Taste of You

Four days until the release of A Taste of You, and I brought you a tasty treat – Valentina’s brownie recipe! 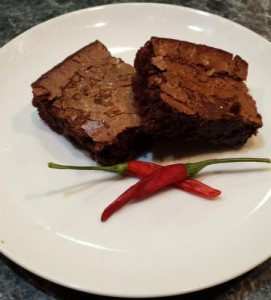 “Did your mama help you make these?”

“Well, I started with one of her recipes,” Valentina admitted, “but I changed it. And she suggested the chocolate, but she let me make a bunch of batches one day so I could try different kinds and taste them all at once. We labeled everything and made notes.”

“What chocolate did you use?”

“Bittersweet. I kept the wrapper so I can remember the name when we go to the store.”

“Serrano. I made some with chipotle, too. Jalapeño was too hot if it wasn’t chopped really fine, and I like the little pieces of pepper.”

“Your mother let you dice the peppers?”

“I can’t use the sharp knives unless she is with me. She has to stand with me and watch, not just be in the kitchen. Is it any good, Uncle Garrett?”

Valentina puts chopped chilies in her brownie – which is something I love. You can add chilies to almost any brownie recipe. In addition to the little kick of heat, they really enhance the chocolate flavor.  I have two go-to brownie recipes. This recipe makes a rich, fudgie brownie. Like Valentina, I usually put serrano peppers in mine and I like bittersweet chocolate.

END_OF_DOCUMENT_TOKEN_TO_BE_REPLACED

Comments Off on Valentina’s Brownies with Chilies Recipe

Tagged as A Taste of You, brownies, chocolate, dessert, desserts, Digital Darlings, foodie, foodie romance, Give Me a Taste, recipe