Happy Valentine’s Day weekend!  Kelly Jensen is here with a scallop recipe that is elegant enough for a Valentine’s Day meal and easy enough to make any time. I’m drooling a little right now and seriously considering having Bones make this recipe for our own Valentine’s Day. (I will assist by uncorking the wine!)

Don’t forget to check out Kelly’s new book, When Was the Last Time. 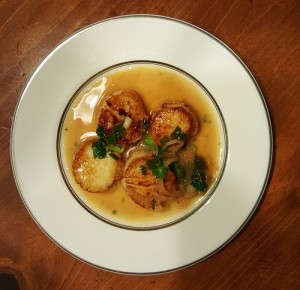 My husband and I have a Valentine’s tradition we cherish. We plan a menu, cook together, and we eat in the proper dining room instead of in the kitchen. Our menus vary. We both like to cook and we’re both adventurous eaters, so our planning usually begins with a theme: a style of cuisine, the food of a particular country or region, or an ingredient we’d both like to try. We’ve roasted, broiled and fried, made chocolate truffles, rolled up sushi, and learned how to poach fish. We’ve eaten a lot of good food—but sometimes the simplest recipes are the most memorable.

Sweetheart Scallops take about ten minutes to make. No kidding. Prep consists of chopping a shallot and a green onion, juicing a lemon and dropping a little flour into a dish. That’s it. Oh, and opening a bottle of white wine—a glass for you and half a cup for the sauce.

You can serve anything alongside these scallops. Their flavour is delicate, so keep that in mind. We usually go for a little linguini or polenta—both work well with the sauce—and a green vegetable. You could also soak up the sauce with some crusty bread. On to the recipe!

Heat oil in a large skillet. Pat the scallops dry and roll through flour lightly seasoned with salt and pepper. Dust off and pan fry until golden (a couple of minutes a side). Remove the scallops from the pan and set them aside aside. Toss the onions and shallots into the hot oil and turn over a couple of times. You’re not really cooking them, just warming them to the point where they become fragrant. Add the wine and stir until your sauce is smooth. Add the lemon juice, parsley and black pepper.

To serve, arrange the scallops on a plate and pour a little sauce over them.

That’s it! Nice and simple, eh? In When Was the Last Time, Paul tries to cook salmon for his partner, Evan. He burns it. I’d like to think he’d have an easier time with this recipe, but seeing as he’s the sort to be easily distracted, probably not. Maybe the short cooking time would help. 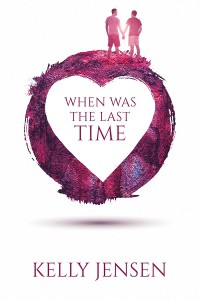 Excerpt from When Was the Last Time

Fat hissed and spat, stinging the back of his hand.

He jerked back, forgetting he was holding a skillet, and the whole sizzling, smoky mess moved away from the stove with him. Taking the pan off the heat helped. His hand was only being burned every three seconds now, instead of three times a second. He waved the smoke away and stared disconsolately at the scorched remains of their dinner. Salmon, looking desiccated rather than flaked. And probably stuck to the pan.

Behind him, the smoke alarm let out a test beep and then, having found its voice, screamed in earnest. Under the cacophony the front door slammed and rapid footsteps beat a path to the kitchen.

Evan skidded across the terrazzo tile, waving away the smoke, and grabbed at Paul’s arm. “Are you hurt?”

Annoyed to have been caught holding the smoldering remains of the only meal he’d tried to cook in—how long?—Paul shrugged Evan’s hand from his arm. “I’m fine. Can you open a window or something?”

Evan tightened his grip before he let go, and Paul tried not to read the quick squeeze as a metaphor. Tried not to hope Evan held that tightly to their love; that he’d squeeze as hard as he could before relinquishing it.

Paul put down the pan and grabbed a towel. He flapped it near the ceiling, pushing the smoke toward the open window. When the alarm stopped screaming, Paul’s ears continued to ring. The back of his throat ached, and he had to keep blinking tears from his eyes. He wasn’t all convinced they were from the smoke, and his hand hurt. He dropped the towel into the sink and shoved his hand under a stream of cold water. Splashed some at his face to clear the smoke from his eyes. Evan appeared next to him and slipped his fingers beneath Paul’s under the rushing water.

“This looks pretty bad, babe. What were you doing?”

Evan’s gaze cut sideways to the pan resting on the draining board. “Is that the salmon?”

Paul shook his head. Evan studied him for a while, still holding his hand beneath the water. Paul felt his lover’s gaze move over his profile and wondered what he saw. He was two years older than Evan. Did it show? Was his slightly bent nose now all crooked and hooked, his dark stubble messy instead of sexy? Did he have too many lines around his mouth and eyes?

Evan touched Paul’s temple, smoothing a strand of hair away from his eyes. Had Evan noticed the gray creeping through his dark locks? It had been there for five years now—so he probably had.

“Hey.” Evan’s voice was barely a whisper. Paul looked at him. “It’s only dinner.”

Swallowing, Paul pulled away. Gently this time. “Sorry, I shouldn’t have tried to cook.” He could burn water if he tried hard enough. Had in fact once burned the bottom out of a pan by letting it boil dry. He got distracted so easily. Windows, wallpaper, shadows on walls. “I just wanted to—” He pressed his lips together. Burned salmon didn’t exactly scream trying to win your love. Again. And sharing the fact he’d thought it might would just embarrass them both. He should stick to sex. No, making love. Something more meaningful than a grab and squeeze in the shower.

About When Was the Last Time

Paul Summerfield is stunned by the gentle reminder it has been over a year since he and his partner, Evan, have made love. He vows to take Evan out for Valentine’s Day. Dinner and sex. Lots of sex. There’s only one catch—he’s supposed to be in San Francisco that week cataloging the art collection of an important new client. No problem, he’ll just change his schedule and cut his trip short by a day.

In San Francisco, Paul struggles with regrets and the fear his love is slipping away from him. Every call to Evan seems only to prove the distance between them is increasing. All this, and a key piece of his client’s catalog is caught up in customs. To keep their Valentine’s date, Paul will have to choose between the career he’s built over fifteen years and the man he’s loved for just as long.

Kelly is the author of a number of novels, novellas and short stories, including the Chaos Station series, co-written with Jenn Burke. At lot of what she writes is speculative in nature, but sometimes it’s just about a guy losing his socks and/or burning dinner. Because life isn’t all conquering aliens and mountain peaks. Sometimes finding a happy ever after is all the adventure we need.