Umm – little reminder – my $25 Amazon gift card giveaway ends tomorrow – so make sure you make it all the way to the bottom of the page if you want to enter for that! 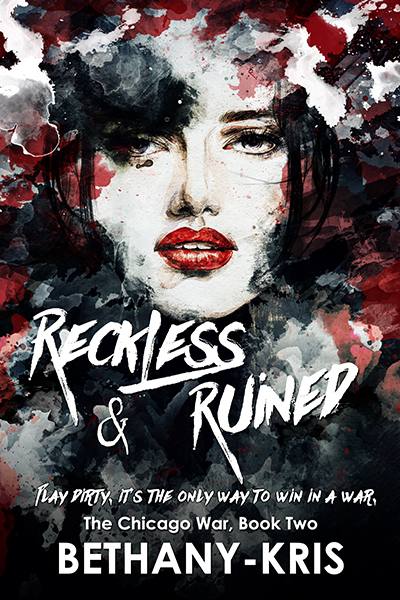 Reckless and Ruined by Bethany-Kris

Play dirty. It’s the only way to win in a war.

Alessa Trentini follows the rules, or so it seems on the outside. A certain Conti has always been able to sway her inner rebel and keep her out of trouble, but even Adriano won’t be able to get her out of her brother’s mess. In a war, no woman is safe if her hand in marriage can advance her family in the world of the mafia. But mistakes of the past have a way of slipping into the present and Alessa will soon learn that even the most shameful of secrets can get her everything she wants.

Adriano Conti’s loyalties are torn as he’s forced to stand at his father’s side while Riley uses his wife’s murder as a way to get higher. Blood comes first and then the Outfit. The one thing he doesn’t question in the war between the families is Alessa Trentini and even that doesn’t seem possible when he’s forced to watch Alessa be used as another man’s pawn. Adriano has his own role to play to get what he wants.

The families in the Outfit have never been more divided than they are now. Blood continues to spill as revenge takes center stage and more lives are lost. But every man in the family is fighting for something different and no one’s intentions can be trusted. Playing a dirty game might be the only way to stay alive.

Even if that means ruining it all.

Excerpt from Reckless and Ruined:

“Did anybody see you come around?” Alessa asked.

“No,” he responded. “I parked a few blocks away and jogged down the backroad before coming in on the property. We’re good.”

Alessa sighed. “Thanks. I’m sorry I didn’t answer you back the last few days.”

“Yes,” Alessa said. “But I’ve been … stuck in my own head, trying to figure out what I was going to do. I thought I should let you know so you can stop worrying about me and move on to your own thing, Adriano.”

“You are my thing,” Adriano replied. “Don’t you know that?”

Alessa dipped her head down, keeping her face out of his view. “I can’t be your thing.”

“Stop it with that shit. None of this matters to me. It never has.”

“I can’t be your thing,” Alessa repeated firmly. “Not anymore. Not now.”

“Hey.” Adriano took a step forward, and Alessa answered it by taking a step back. “What is up with you?”

Alessa shrugged. “It’s been settled. I’m going to have to marry Dean Artino. The engagement and wedding date isn’t official, but I’m sure Joel will be an asshole and send an invitation to your father. I wanted you to find out from me and not someone else through the grape vine.”

Air cut through Adriano’s lungs with a searing burn. A ball of rage and possessiveness swirled in his midsection hard and fast, threatening to take him under with the current. Alessa was, and always had been, his.

Over his dead body.

“No,” Adriano said in a growl, stepping closer to her.

Alessa blinked up at him. “W-what?”

“No. You’re not marrying Dean.”

“I don’t think you understand, Adriano.”

“Oh, I understand perfectly fucking well.” Adriano couldn’t help but notice how Alessa didn’t back off the closer he came. Once they were toe-to-toe under the willow tree, she had to look up at him to hold his gaze. “I get it, but it’s not happening.”

Alessa’s tongue peeked out to wet her lips. “Right now, it’s just the promise of an engagement between Dean and me soon, but Joel assured me the wedding would happen within the next few months. I don’t get a choice and it’s not fair to you, so let me do what I have to. Okay?”

“No,” he repeated darkly.

If you’re behind, make sure to pick up the first book in the series Deathless and Divided! 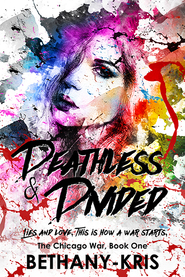 Bethany-Kris is a Canadian author, lover of much, and mother to three young sons, one cat, and three dogs. A small town in Eastern Canada where she was born and raised is where she has always called home. With her boys under her feet, a snuggling cat, barking dogs, and a hubby calling over his shoulder, she is nearly always writing something … when she can find the time.

Sign up to Bethany-Kris’s New Release Newsletter for instant notification when her new releases are out.

2 Responses to Bethany-Kris: Reckless and Ruined