Please welcome Mickie Sherwood to the blog with bona-fide Louisiana red beans. Mickie – this is one of my favorite comfort foods from home so can’t wait to see how you make yours. I like mine with a little andouille, but I mix it up with the meat and sometimes even go vegetarian.

From boudin, crabs, and crawfish to red beans and rice, food is king in South Louisiana. Somebody eats something delicious in all of my novels. But, we get to that later.

Now, I’ll share my version of how to prepare the scrumptious meal of red beans and rice. No two cooks cook red beans the same way. Some people like to cook them so that the bean is done but the skin is unbroken. Others prefer their beans cooked to a creamy consistency, meaning the outer skin breaks open.

I love mine in-between. There is a combination of both. This way my bean juice, or gravy if you want to call it that, is just right for my rice.

Read beans (You determine the amount to cook. I cooked 1 cup.)

1) Pick and wash the beans to remove the grit.

2) Pour beans in a pot and cover with water.

3) Add chopped onions, green onions, and bell peppers. Season to taste. Be mindful of the salt because you’re adding ham.

4) Cube the ham while water starts to boil. 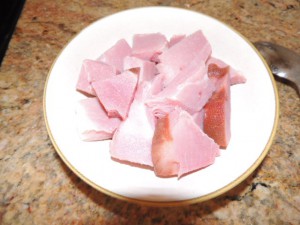 5) Add ham to beans and reduce the heat to medium. 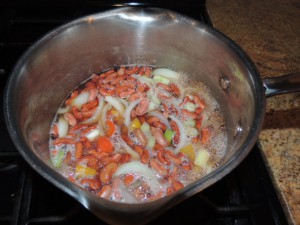 6) Keep an eye to prevent water from cooking down too low. Add more as needed, stirring constantly.

7) Cook beans to perfection, about two hours. I cook mine on a moderately high heat to make them creamy. That means they must be under a constant eye to prevent scorching. 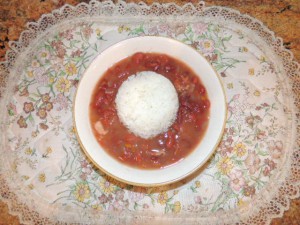 Add a dash of Louisiana Hot Sauce or Tabasco Sauce and you’re all set. Enjoy your meal with a hunk of cornbread!

You can read the full recipe with pictures at my blog.

Earlier, I mentioned crawfish. If you’ve ever been to South Louisiana, you’ve probably dared to eat a few. Booker Templet, the hero in Templet’s Tasty Tails, my latest mainstream romance, is a crawfish farmer who is determined to woo Web Designer, Erika Washington. After their initial business meeting ended in a spirited fashion, he stumbles upon her at an Easter crawfish boil held by a mutual acquaintance. 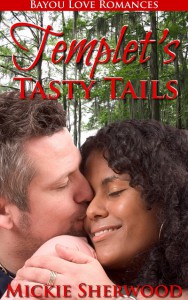 Web Designer Erika Washington’s contract with her childhood best friend covers all possibilities about her pregnancy. But, one unpredictable event redirects her future. As a donor-surrogate, what does one do when fate changes the plan and claims the lives of the intended parents? If you’re selfless, strong-willed Erika Washington, you mount a defense to keep your baby.

Entrepreneur Booker Templet, owner of Templet’s Tasty Tails, secretly agrees to help his first cousin. However, unfortunate circumstances change the course of his life. After he learns the identity of the other donor, Booker plans to be a part of his child’s life. No matter what.

Will Erika and Booker battle over custody of the baby? Will their horrible loss help them find consolation in each other’s arms? Or will fate intervene yet again?

Steps behind Vince, Booker walked into the dusky evening. The noise level indicated the event was still in full swing. Searching the grounds for Erika, he spotted her away from the masses. Although Vince appeared hesitant about joining the women, Booker did not give it a second thought. He sauntered over.

“Well, how are Templet’s Tasty Tails?”

“That’s a catchy title for your website,” Erika complimented.

“Ahh. But, I don’t have one. Yet.” Taking it upon himself, Booker swiped a crawfish from their pile and peeled it. “I seem to remember a certain web designer cutting me loose.” Like a crawfish-eating connoisseur, he devoured the tail. “Meaty. Succulent. Delicious.”

“If you must say so yourself, huh?” Erika picked at him, presenting him a half-smile. He noticed she soaked the fingers of one hand in a cup of water.

She turned her palm upward. The tips of her fingers were shriveled and streaked red.

“Like a four-alarm blaze,” she said. “Too many crawfish aren’t good in my condition, anyway.”

“I know what’ll help.” Booker went to the bar and came back. “Try this.”

He replaced the water cup with milk. Next, he lifted her hand, feeling her ultra-soft skin. Erika allowed him to submerge her fingers.

“That does feel better.”

“Wow. I call that progress.”

During their whole exchange, Theresa and Vince watched in silence. Vince whispered something in Theresa’s ear. Theresa nodded and looked at Vince with loving eyes.

“If you’re still interested, I have an idea for your site.” Erika appeared to recognize the other couple’s need for a private moment.

“Come on.” She got up with her fingers resting in the cup of milk. “My case is in the house.”

Erika seemed to toy with the idea of rejection. She did an embellished eye bat. As if she had X-ray vision that could see to his core, she mapped his body from head to toe, and back up to his eyes.

As he accompanied Erika into the house, Booker felt relieved to be in her good graces.

What actors would I love to see in the roles of Erika and Booker? I’ll show you at Templet’s Tasty Tails’ Pinterest Storyboard: .

If you’ve never had crawfish and would like to see how to boil and peel them, I have a blog post for that. Check it out here . This post has pictures and a video.

Thank you, Irene, for including me.

I’m a cruise-loving, people-watching, picture-snapping baby boomer with time on my hands. So, I create sweet, and spicy relationship-based, mainstream-contemporary, romantic love stories.