Kristina Knight in the house! I’m so excited y’all. I’ve known Kristina since we were both debut authors in 2012. She was releasing What a Texas Girl Wants, the very first book in her Texas Wishes series, and well, I live in Texas and… Friendship! So of course Kristi showed me up by bringing something delish that’s also healthy.  Chocolate and strawberries. Make sure and scroll past the recipe to check out The Anthem Series which include her latest book Start Me Up!

The days are getting shorter and cooler here on the North Coast, but I’m still craving one of my summer favorites: smoothies! RadioMan and I made mudslides (natch) and last week he created a Snickers Smoothie which was *so* good, but my go-to this summer has been Chocolate Strawberry. I’m not sure what happened with our local farmers, but their strawberries this year have been to die for. I’m going to be in serious withdrawal in a couple of weeks, but for now I’ve got fresh strawberries so let’s give this recipe a try! 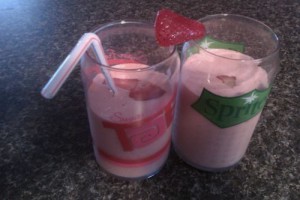 1 Cup Fresh strawberries – if you can freeze them overnight, even better, they’ll act as ice!
1 Cup 2% milk – or whatever style of milk you prefer
1/2 packet Carnation Instant Breakfast, either the milk chocolate or dark chocolate. Your preference!
2 Scoops protein shake powder – I use Pure Protein Vanilla

*Serves: 2-3, depending on the size of your glass…and your appetite!

Toss all that in a blender, put it on low it for a few seconds to chop up the strawberries and then change to pulse for about 30 seconds. Pour into your favorite glass, grab a large straw and enjoy! It’s a meal that tastes like a treat.

What I love about this smoothie: It’s good for you, especially those of us who need a little more protein. It tastes delish – I’m talking better than Mr. Smoothie smoothies. If you’re trying to lose a little weight for swimsuit season, try it as a breakfast substitute or an afternoon snack, you’ll be surprised how filling it really is.

My disclaimer: I’m not a doctor or a nurse. I’m not suggesting you go on a smoothie diet or anything. But if you’re looking for a filling, not-candy-bar-calorie treat, try this. 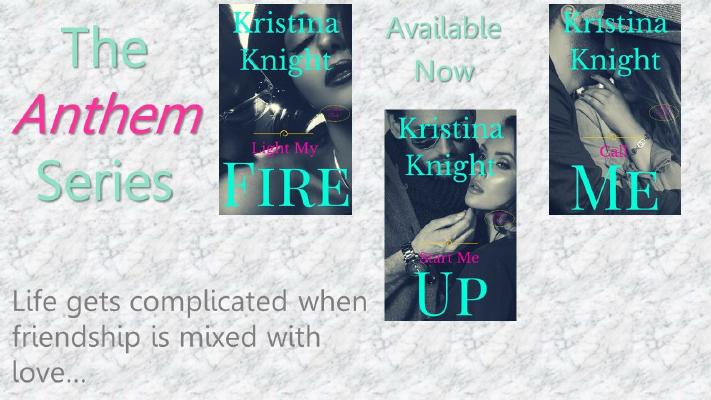 Lily MacIntyre’s life is offtrack, and she knows exactly how to right it: shed her America’s sweetheart image in a big way. Getting down and dirty in a limo with rocker Nate Lansford seems like the perfect solution. Plus, she’s had a mad crush on him practically since birth. The only problem? Nate is her brother’s best friend…and he doesn’t see her as anything other than a surrogate little sister.

Matchmaker Nina Wright might work in LA but she keeps Hollywood types off her client list. She doesn’t need their drama and she doesn’t like the way so many of them exchange lovers like last year’s accessories. But she needs one happy, high-profile client to get her business off the tabloid pages and back on solid ground.

Hollywood hottie Chase MacIntyre wants the gossip surrounding his lastest fling to stop and he knows exactly how to do it: show up on his next red carpet with a new woman and once he meets Nina Wright he knows she is the woman to stop the presses.

The problem? Once they’re under cover, this business-only agreement is definitely too hot to handle…

Katrina Phillips is itchy. The job that has always challenged her seems stifling, her friends are all pairing off and she’s been without male companionship for seven long months.

Josh Hanna is paying off a debt: fly to LA, play backup for the house band during the season finale of Star Power and then back to his boring – and sober – life in San Francisco.

But five years hasn’t been long enough to douse the flames between them, and its hard to remember why things went so badly in the first place…

Once upon a time, Kristina Knight spent her days running from car crash to fire to meetings with local police–no, she wasn’t a troublemaker, she was a journalist. Her career took her all over the United States, writing about everything from a serial killer’s capture to the National Finals Rodeo. Along the way she found her very own Knight in Shining Cowboy Boots and an abiding love for romance novels. And just like the characters from her favorite books, she’s living her own happily ever after.

Kristina writes sassy contemporary romance novels; her books have appeared on Kindle Best Seller Lists. She loves hearing from readers, so drop her a line!