Warning: Declaration of Share_Kindle::display_preview() should be compatible with Sharing_Source::display_preview($echo = true, $force_smart = false, $button_style = NULL) in /home/customer/www/irenepreston.com/public_html/blog/wp-content/plugins/send-to-kindle/jetpack.php on line 67
 The Improvisational Cook : Recipe, Giveaway, and a Free Cookbook for the Asking | Irene Preston
May 29, 2015 · 1:08 am

The Improvisational Cook : Recipe, Giveaway, and a Free Cookbook for the Asking

Yay, fish! I can’t believe this is my first Friday fish dish! Lisabet Sarai is here with a great snapper dish plus a FREE cookbook – all you have to do is comment to get your copy.  In addition, one random commenter will score a copy of The Ingredients of Bliss  – make sure to leave a comment y’all! 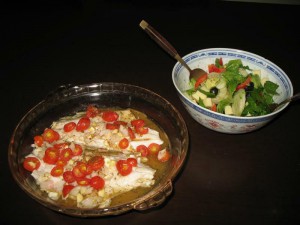 I’ve been cooking since I was seven or eight. (I’m in my sixties now.) I still love the sense of creativity I get in the kitchen. However, I’ve never been the sort to follow recipes, at least not verbatim. I’ll browse my cookbooks looking for ideas, but then I generally embellish the recipes I find based on my own instincts. For day-to-day meal preparation, I have a core set of ingredients and seasonings always on hand, but I rarely plan the details ahead of time. Instead, I improvise.

The advantages of this approach? My meals are never boring, because I never make a dish exactly the same twice in a row. The downside? Occasionally my experiments fall flat, and once in a great while, they fail spectacularly. (I will never forget the stuffed peppers that exploded on top of the stove…!)

My indulgent husband accepts the pros and cons of my improvisational approach. Actually, he enjoys cooking as well (though not as a routine activity).  More than half our cookbook collection originally belonged to him.

Anyway, here’s a quick, healthy dinner dish with plenty of flavor, that I more or less invented. DH says it doesn’t really  taste Mexican,  but hey, it’s my recipe, I can call it whatever I want.

Two white snapper fillets, about half a pound total

Serve with rice, tortillas and a tossed salad. To add to the Mexican theme, add half a cup chopped avocado and half a cup black olives to the salad.

Want a copy of my free e-cookbook, Recipes from an International Kitchen? Just leave a comment on this post, asking for it. Be sure to include your email address! I will also give away a copy of The Ingredients of Bliss to the author of one randomly selected comment. If you like food, adventure, romance and steamy sex, you’ll adore this book. 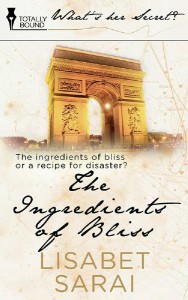 The Ingredients of Bliss

One sexy French chef. One kinky American TV producer. One ambitious Chinese gal who thinks she wants them both. The ingredients of bliss? Or a recipe for disaster?

Accomplished cook Mei Lee ‘Emily’ Wong knows exactly what she wants—her own show on the Tastes of France food channel. But life is full of complications. First, her deceptively nerdy producer, Harry Sanborne, initiates Emily into the delights of submission. Then her boss, legendary chef Etienne Duvalier, begs her to dominate him. Emily just can’t resist—especially when Harry orders her to explore her inner mistress. Suave and sexy Etienne will do whatever she asks—in the bedroom if not in the kitchen. And Harry, her lovingly diabolical Dom, adores pushing Emily’s limits.

When the network sends the trio to France to shoot a series of cooking shows on location, Emily knows her career is on the upswing. Her plans fall apart in Marseille as a Hong Kong drug syndicate kidnaps both Etienne and Harry. The Iron Hammer Triad mistakes Etienne for notorious gangster Jean Le Requin, who has stolen their drug shipment, worth millions. Emily realizes she must find the real Le Requin, retrieve the purloined dope, and bargain it for Harry’s and Etienne’s lives. The secret she’s been keeping from Harry might prove useful. Still, what chance does one woman whose knife skills are limited to chopping vegetables, have against the ruthless cruelty of two criminal organizations?

Where to Buy The Ingredients of Bliss 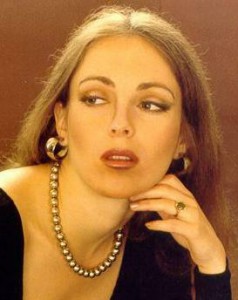 I have more degrees than anyone would ever need, from prestigious educational institutions who would no doubt be deeply embarrassed by my chosen genre.  Aside from writing, travel is one of my most fervent passions.  I’ve visited every continent except Australia, though I still have a long bucket list of places I haven’t been. Currently I live in Southeast Asia with my indulgent husband and two exceptional felines, where I pursues an alternative career that is completely unrelated to my creative writing.

Make sure to visit Lisabet online:

12 Responses to The Improvisational Cook : Recipe, Giveaway, and a Free Cookbook for the Asking