Lizzi Tremayne is here today with some “Old World” flavors and a tantalizing look at her book A Long Trail Rolling. I love rye and can’t wait to give this one a try! 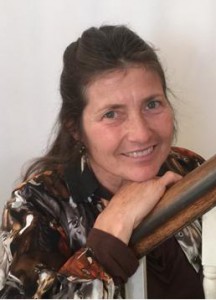 Suddenly hungry, her heart and body craving succour, Aleksandra reached for the zakwas sour rye culture and started a pot of żurek. Like the wheaten sourdough starter other pioneers in the West used to leaven their biscuits and breads, zakwas gave żurek, the traditional Polish comfort food, a unique taste when stewed with grilled kielbasa, bacon, potatoes, mushrooms, and sour cream. Nibbling at crispy shreds of the aromatic sausage as it cooked, she sighed with pleasure and began to smile again.

This hearty stew, typical of the ‘sour’ soups common and beloved by many Eastern Europeans, is my favorite soup. It is well worth the time it takes to make it. Thank you to the Glinkowski family, third generation owners of Glinkowski Carriages, for sharing with us their love of Poland and Żurek. After leaving them, we tasted different versions of it in every town we visited around Polska.

The resulting culture: After I use some to make żurek, I refresh the rest by ‘feeding it’ more kibbled/cracked rye or rye flour and water, as Aleksandra’s mother did in the story. Leave out, covered, to ferment overnight then refrigerate. When it hasn’t been used for a while, liquid will accumulate on top and be less active. Stir it and replenish as above. With this starter, I can make żurek whenever I want and also use it as a starter in sourdough rye bread recipes.

NB:  for our purposes,

salt and pepper to taste

6 eggs, boiled and cut into wedges or quarters

4 potatoes, boiled and hot, cut into quarters or cubes

In large soup pot, brown chopped onion till translucent, then add bacon and cut up sausage. Stir-fry until browned (some prefer to prick sausages and cook them whole in the liquid soup, then cut up later). Add spices and boiling water or stock. Add zakwas, while whisking. This will thicken the soup. If you used oat flakes, you may wish to strain the zakwas but I don’t strain it, as I also use kibbled rye in my starter. They cook down, J.

To serve, ladle soup over potatoes and eggs placed into the bottom of individual bowls or make bread trenchers to use in their place! Cheat by horizontally cutting the top off of a large bun to create a lid (or cut a hole out of the top as you would a Jack O’Lantern pumpkin). Hollow the bread out and ladle the soup into it. 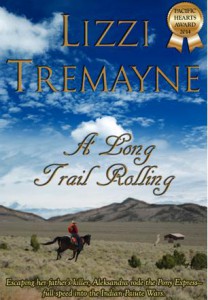 She didn’t expect to become a target, but she is one now!

It might have been the mare that did it, stopping dead in her tracks, nearly dropping Aleksandra over her shoulder, or maybe it was the flies that buzzed around the blood pooling beneath the butchered man in the Pony Express station doorway. Whichever it was, it got her full attention.

Seventeen year old Aleksandra, trained in the Cossack arts from infancy by her father, finds herself alone and running to prevent her Pa’s killer from obtaining a secret coveted by the Russian Czar, one which could alter the forces of power in Europe. Disguised as a Pony Express rider in 1860’s Utah Territory, she finds herself in even deeper trouble when she rides full speed into the middle of the Indian Paiute Wars. Her Californio boss Xavier has a strength to match her own, but can they overcome their differences before the ever-increasing odds overtake them?

With this debut Western Historical Adventure, Lizzi Tremayne won the 2014 RWNZ Pacific Hearts Award and was a finalist in the 2013 Great Beginnings. A saga of the Old West with a multicultural cast of those who make up America, it would interest readers who enjoy Westerns, horses, American Indians, immigrants, and the Pony Express. It has a capable heroine, strong historical detail, period veterinary treatment and frontier-pushing characters. It has been compared to the work of Phillipa Gregory, Diana Gabaldon and Jean Auel, with a little Laura Ingalls Wilder thrown in.

The Series:      This novel is the first in The Long Trail quadrilogy of historical adventure sagas following Aleksandra and Xavier from the wilderness of 1860 Utah to Colonial New Zealand.

Where to buy A Long Trail Rolling:

Lizzi grew up riding wild in the Santa Cruz Mountain redwoods, became an equine veterinarian at UC Davis School of Veterinary Medicine, practiced in the California Pony Express and Gold Country before emigrating to New Zealand. She is the proud mother of two boys in that sea of green. When  not writing, she’s swinging a rapier or shooting a bow in medieval garb, riding, driving a carriage or playing on her farm, singing, or working as an equine veterinarian or science teacher. She is multiply published and awarded in special interest magazines and veterinary periodicals.

Author Links: You can read more about me and what I write, as well as contacting me at: