I thought I would bring you something with a little Latino flair today. Dylan, my chef from “Tall Order” is third generation Mexican American. He doesn’t speak any Spanish, but his roots shine through when he is cooking at home for Win. Since Bones has callously refused to butcher a goat and dig a pit so I could make you authentic barbacoa, I had to fall back on something I could throw together in the kitchen during the five minutes I generally allow for food prep. Ready? 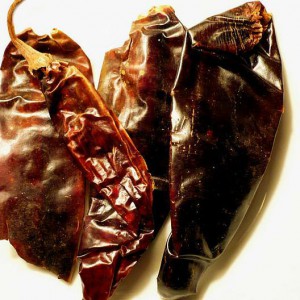 So, first we’re going to make the garlic sauce (mojo de ajo). I like to make mine with guajillo chilies. You can get guajilloes dried in most supermarkets.  They have a milder heat than, say, a jalapeno or a serrano and the taste is a little brighter. They are also a lot bigger, so if you’re going to substitute something, you’ll need to adjust the quantity.

Put the oil in a skillet or saucepan and heat it until a few drops of water flicked into it sizzle. Using tongs, place a dried chili in the oil. Cook for about 5 seconds, then remove to drain on a paper towel. Repeat with the other two chilies.

Next cook the garlic in the same oil. Stir occasionally and cook until just golden. Be careful not to overcook the chilies or garlic.

Now set your garlic and oil aside to cool a little. By now the chilies are probably cool enough to handle. Take off the stems and put the remainder of the chilies in a food processor. Process until you have small chili flakes (but not powder).

Stir the chili flakes, lime juice, and salt into your garlic and oil.

So that is your mojo de ajo. You can let it cool completely, put it in a jar, and store in the refrigerator for several days if needed.

We’re going to use most of it for our recipe though!

Go ahead and cook your pasta according to the package directions. If you’re good at multitasking, you can cook your pasta and shrimp at the same time. If not, just go ahead and do the pasta. The shrimp will only take a couple of minutes. If you do your pasta first, add a little of the mojo de ajo right after you drain it so it won’t try to stick.

Now heat a couple of tablespoons of the oil from your garlic sauce in a skillet. Just the oil.  If you put any of the garlic in now, it is likely to burn. After it is hot, add the shrimp and cook until just pink (really, only a minute or two).  Turn off the heat and add 1/2 – 3/4 cup of the mojo de ajo.

Final step. Toss everything together!

If you want, you can add some grated cheese to the pasta and/or garnish with some green onions, parsley or cilantro.

And that’s it! Remember, if you have any sauce left over, you can stick it in the fridge and use it for something later in the week.

I didn’t take a picture (sorry). If I make this soon, maybe I’ll update the post.

Instead, here is a guajillo quote from “Tall Order“!

He glanced down at his blue Roy Rogers-style shirt and brown polyester pants. He looked like something out of a bad fifties western. He was a walking joke. Fitting, because Joe Bob’s Texas Catering Company was a joke to everyone in the Austin culinary world.  A year ago, if anyone had told him he would ever touch food prepared by Joe Bob’s he would have laughed his ass off. Now here he was, Joe Bob’s new pet chef, hired on for the SXSW music festival to trot out in front of V.I.P. clients.

What difference Dylan’s culinary skills made, he didn’t know. Joe Bob’s catered to the convention crowd because no real Texan would hire them. The company churned out bland, assembly line food that the owner, Felix Minger, hawked as “real Texas barbeque” and “authentic Tex-Mex” to moon-faced Yankees who didn’t know pico de gallo from picante sauce much less a jalapeño from a guajillo.

Dex Reed, New Yorker via New Zealand with more cash than brains, had been the perfect mark. Felix had culled the rock star out of the SXSW crowd the way a lion separates the sick gazelle from the herd. Dylan would never forget the conference call to go over the menu. Dex wanted Tex-Mex, his concept of which seemed to be an unholy fusion of national fast-food chain offerings and the latest catch-phrases he’d picked up from Food Network. The rock star had heard Austin was the place to get tacos, so tacos were what he wanted—but not ordinary tacos. Something “elevated” and “in a taco bar, like that Elvis place.”

“Elevated tacos. Got it.” Dylan had nodded solemnly and tried not to laugh, because conference calls now included video and as much as he despised Felix and Joe Bob’s, he needed the extra paycheck. Three red-eye shifts a week in a diner out by the airport weren’t cutting it.

He didn’t know how he was supposed to elevate anything destined to be stuck in a buffet and self-assembled by drunk music fans. Never mind the “Elvis place” had a nacho bar, not a taco bar, and there was nothing “elevated” about it. 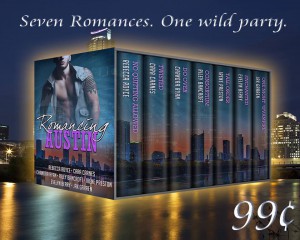