I’m not going to lie to you. I drooled a little when I got the picture for this Friday’s foodie post. Grilled cheese is one of my absolute favorite  comfort foods.  Racheline Maltese is here to show us how to make some yummy gourmet variations on the classic including an amazing dessert. If you’ve been slapping a single-slice of American between two pieces of white bread, it’s time to up your game!

Make sure you  scroll down to get a preview of Racheline’s new book, Doves and don’t forget to enter my $25 Amazon Gift Card  giveaway! 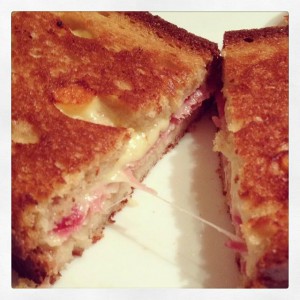 In some ways, I’m not a cook at all. I don’t own any fancy tools, I don’t use cookbooks, and I rarely plan meals out in advance. But I am the person who will look into the refrigerator and make something up on the fly that is often pretty great. Like some people have a strong internal sense of direction, I have a strong internal sense of food logic, which has carried over to Victor, one of the secondary characters in the Love in Los Angeles series I co-write with Erin McRae.

Sometimes, this character goes for the fancy, planned, and sophisticated food I never bother with. Certainly, he has more expensive cookware than me and better knife skills. But like me, he brings his internal food logic to making ordinary meals extraordinary.

For example, he’s happy to whip up a grilled cheese sandwich and tomato soup as comfort food when his boyfriend Liam is having a bad day, but nothing about that grilled cheese is simple.

In fact, all the ways grilled cheese can be dressed up without a lot of ingredients or a set recipe makes it one of my own favorite go-tos. It’s also one of Erin and my staple foods when we spend time in our Philadelphia writing office. There’s a place in Reading Terminal Market that makes absolutely divine grilled cheese, and those sandwiches have gotten us through many a long day of writing and editing.

If you want to try your own hand at grilled cheese, here are some of my (and Victor’s) favorite combinations.

Heavily butter one slice of bread and place it butter side down in a frying pan.
Layer with a slice of havarti cheese, prosciutto, pesto, and a second havarti slice.
Place a second piece of bread on top and butter.
Turn on your stove on the lowest heat setting and let cook until cheese melts, sealing the sandwich shut.
Turn temperature to high and watch closely as butter starts to burn. You want golden brown, not charcoal. When that side is done, flip to get the other side to the level of doneness.
Plate the sandwich and then drizzle with balsamic glaze, and add black pepper and salt to taste. Eat with a knife and fork, if you don’t want to get butter everywhere.

Follow instructions 1-5 replacing the ingredients with swiss cheese and ham
Cut sandwich crosswise into 4 wedges and serve with honey mustard dip (make your own — honey and mustard — to get the exact flavor you want.

Follow instructions 1-5, replacing the center ingredients with cheddar and sliced cooked chicken (fresh or packaged cold cuts).
Serve with sweet red-pepper chutney (available in ethnic food aisles in the supermarket– I’ve seen this grouped with Indian, Italian, and British food, so you may have to look closely).

Heavily butter one slice of bread and place butter side down on wax paper.
Layer with goat cheese, thinly sliced strawberries (pat strawberries dry with towel to remove excess moisture), and more goat cheese. Make sure strawberries are fully surrounded/covered by the goat cheese.
Place second piece of bread on top and butter.
Wrap in the wax paper and freeze for 1 – 3 hours.
Pre-heat pan on high.
Remove sandwich from freezer, unwrap wax paper, and place in pan.
This is going to cook fast, and will not hold together as strongly as versions 1-3. Pay careful attention and be ready with a second utensil to hold the top on when flipping if this isn’t a strong skill for you.
Once both sides are golden brown, plate and drizzle with chocolate sauce. Don’t have chocolate sauce? Melt whatever chocolate bar you have on hand in a small pot placed in a bigger pot that you’ve filled with water. On a low flame, you’ve improvised a double boiler, and have gooey chocolate for you dessert grilled cheese. 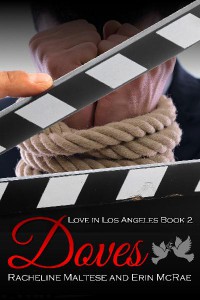 Two years after the events of Starling, Cinderella story and star of The Fourth Estate J. Alex Cook is living happily ever after with his boyfriend, television writer Paul Marion Keane. But when Paul’s pilot, Winsome, AZ, gets picked up, the competing demands of their high-profile careers make them question their future together.

As Paul becomes increasingly absent from their relationship, Alex tries to regain control of his private life and establish a career path independent of Fourth’s enigmatic, and at times malevolent, showrunner Victor. But the delicate web of relationships that connects Alex, Paul, and their friends — including Alex’s excitable ex-lover Liam and his no-nonsense fiancÃ©e Carly — threatens to unravel.

With the business of Hollywood making it hard to remember who he is when the whole world isn’t watching, Alex is forced to confront major changes in the fairytale life he never wanted as he discovers that love in Los Angeles often looks nothing like the movies.

“Okay, we need to talk,” Carly calls as she lets herself into Victor’s house. She’s told Victor before that sometimes she feels extremely weird that both she and Â Liam have keys, but he resents interruptions so intensely that he’d rather trust them than have to bother with the door whenever they come over. Victor nods at her from the stove where he’s making omelets.
“About?” he asks blandly as he crumbles cheese into one of the pans and Carly kisses Liam hello where he’s sitting at the bar that divides the kitchen from the next room, his bare feet hooked on the crossbar of the chair.
“I just got off the phone with Paul. What is going on with him and Alex?” she says, dropping her bags down and leaning into Liam’s side. He snakes an arm around her waist and frowns.
“Nothing good,” Liam says.
“Obviously,” Victor says. They all sit there silently for a long moment, listening to the faint gas hiss of the stove and Victor occasionally scraping the pans against the burners as he flips the omelets.
“I think it’s Paul,” Liam says.
“Don’t take sides, Lee,” Victor chides, although he certainly thinks it’s Paul too. Alex is likely being unhelpful, stubborn, and possibly mean. But Paul is insecure, which is dangerous.

Where to Buy Doves:

About Erin McRae and Racheline Maltese

Erin McRae and Racheline Maltese are authors of the gay romance series Love in Los Angeles, set in the film and television industry (Starling (September 10, 2014), Doves (January 21, 2015), and Phoenix (June 10, 2015)), all from Torquere Press. Their gay romance novella Midsummer, Book One of the Love’s Labour series, about a summerstock Shakespeare company, is from Dreamspinner Press (Summer 2015). Racheline is a NYC-based performer and storyteller; Erin is a writer and blogger based in Washington, D.C. They write stories and scripts about the intersection of private lives, fame, and desire. You can find them on the web at http://www.Avian30.com.