Katie Graykowski: Hand over the cinnamon rolls and no one gets hurt

Best-selling romantic comedy author Katie Graykowski is here for FOODIE FRIDAY today. I still remember the first time she shared the opening to her first book, Perfect Summer, in our local writer’s group. I laughed out loud then. I laughed out loud again when I read the actual book, and I’m still a fan today.

Katie’s brought along some FREE BOOKS and CINNAMON ROLLS. To be clear, the books (5 copies of CHANGING LANES) are free to a few lucky commenters. I’m going to eat the cinnamon rolls. All of them. Back off my cinnamon rolls. I doubt we could squish them into an email attachment anyway. 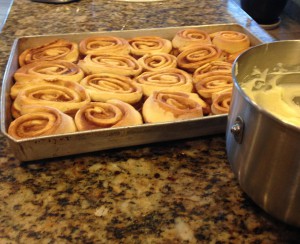 For me, the holiday season is all about the food…specifically breakfast. On Christmas morning, I make cinnamon rolls and an egg/sausage casserole. For drinks, we have mimosas. This Christmas morning food ritual is one that I carried over from my mother, Barbara McCelland. She likes to fill her cinnamon rolls with apples and cherries while I prefer straight up cinnamon.

For those of you who don’t know, my mother has written three cookbooks and has written a cooking column in the Longview News Journal for over forty years so baking comes naturally to me.

In my mother’s house, after breakfast, she starts on a lavish feast that includes turkey, ham, and a billion sides dishes. And don’t get me started on the desserts. While in my house, I figure that the effort of making homemade cinnamon rolls is enough. If you want a Christmas dinner…there’s the kitchen and don’t forget to clean up after yourself. I’ll be right here on the sofa drinking the rest of the mimosas.

What are your holiday food rituals?

“Are those the ones she made last Christmas with the cream cheese icing and the little bits of orange zest?” Devon’s stomach sat back on its heels and begged like a dog for a treat.

Devon and Keshaun exchanged a look.

Keshaun crossed his arms. “Think we can take this skinny-assed white boy?”

“With my eyes closed and one hand tied behind my back.” Devon nodded. “Hand over the cinnamon rolls, and no one gets hurt.”

For the dough- heat the butter with the milk, 3/4 cups of the sugar and the salt in either a small saucepan or in the microwave, until the butter is melted. Set aside to cool.

In a large mixing bowl, sprinkle the yeast over the warm orange juice (110-ish degrees) and add the remaining teaspoon of sugar, stir and set aside for 10 minutes, until the mixture is bubbly. Add the lukewarm mixture and the eggs, beating until well combined. Add the flour a cup at a time, stirring and using enough flour to form a stiff dough. Turn out onto a floured board and knead until smooth and satiny, approximately 10 minutes. (Or place in the bowl on a heavy duty electric mixer and knead with a dough hook until the dough cleans the sides of the bowl, approximately 5 minutes). Place the dough in a very large buttered bowl, turn to butter the top and allow to rise, covered loosely with a kitchen towel, in a warm place until doubled in bulk, approximately 1 hour. Punch the dough down and roll out to a large rectangle, 24″ x 36″. Butter two 9″ x 13″ baking dishes.

For the filling- beat together the brown sugar, butter and cinnamon until it looks like wet sand. Spread evenly over the surface of the dough. Roll up lengthwise and cut at 2″ intervals to make 12 rolls. Place 6 rolls in each buttered dish. Cover loosely with a kitchen towel and allow to rise until doubled in bulk, about an hour.

Preheat the oven to 350. Bake the rolls for about 20-30 minutes or until puffed and browned.
For the frosting- beat the cream cheese, cream and vanilla until well combined. Add the confectioners sugar and beat until smooth and soft, not stiff. Frost the rolls and serve immediately.

Here’s the recipe for the casserole. I don’t have a book reference because well…I don’t like eggs so none of my characters do either. For me, breakfast is all about the baked goods.

Mix sour cream and chills into eggs. Layer casserole starting with sausage, cheese, and then pour the eggs mixture on top.

Bake for 1 hour or until egg mixture is set. 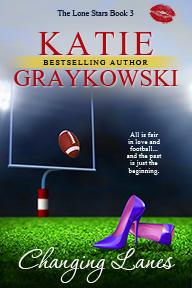 Professional Football Player, Devon Harding found his soul mate at the age of seventeen. Trouble is, he can’t remember her last name. For the last fourteen years, he’s been waiting for The Universe to send her back to him. When that day comes, he nearly falls all over himself to get to her. But he plays it cool and waits for her to come to him.

And she walks right past him.

Pediatric Oncologist, Laney Nixon has only been in love once—at the age of sixteen. For the last fourteen years, she’s looked for him, but not knowing his last name has made finding him impossible. But when she comes face-to-face with him, she doesn’t recognize him.

Can Devon get her to remember the past so they can have a future?

Because all is fair in love and football…and the past is just the beginning. 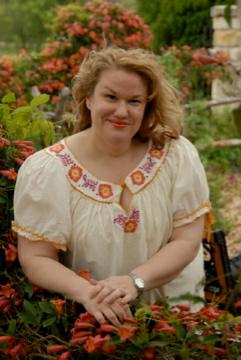 Katie Graykowski is a bestselling author who likes sassy heroines, Mexican food, and glitter nail polish. She’d love to hear from you.

See all Katie’s Books on Amazon

Don’t forget, Katie wants to know, “What are your holiday food rituals?“

To enter, leave a comment below. We’ll leave the contest open until at least noon Saturday. Make sure to leave your email or other contact so we can reach you if you win!

19 Responses to Katie Graykowski: Hand over the cinnamon rolls and no one gets hurt