Makes 4-6 pancakes (and I can eat them all in one sitting, but should probably share with another person)

1 medium-sized green plantain*, peeled and chopped for your food processor

1/4cp applesauce (or peel and chop half an apple)

1 tbl coconut cream or milk (can sub regular cream or whole milk. Of course it’s not vegan then! These will still work if you leave this out entirely, but the texture will be hard all the way through instead of crunchy outside, soft middle)

coconut oil (or other cooking fat)

* Yellow will work, but a fully ripe plantain, i.e. black, will be much sweeter, have a banana-like taste, and make the recipe wetter. They’ll take longer to cook, but it would probably still work if that’s all you have (and you like the flavor of bananas). If you’re unfamiliar with cooking with plantains, they’re like extra-firm bananas. To peel them, I chop off both ends, half the plantain, and then cut each side in half the long way. That makes them easy to peel with your fingers. Here’s a great video on working with them.

** Spices can be changed at will. Instead of cloves, sometimes I use a little nutmeg and a dash of vanilla. Cinnamon would undoubtedly be good, too. Use your favorite spices to make the pancakes your own.

Pancakes, waffles, or french toast; which should Brett best use to tempt you? (I’m a pancake girl, but if anybody has a good grain free, egg-free waffle recipe, I’d love to hear it!) I’m giving away 5 copies of The Elf and the Ice Princess, a holiday foodie romance, to commenters. If any answers particularly catch my eye, I’ll give copies to those commenters, then randomly select the rest. 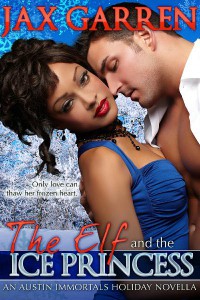 The Elf and the Ice Princess

A frozen heart…
Three years ago the man who made Carrie Martin believe in happily-ever-afters deserted her after a holiday tragedy. Ever since, she’s seen no reason for holiday joy amid the materialism and chaos of the most stressful time of year. So at happy hour when a drunken man in an elf costume falls into her lap and spouts poetry, it’s just one more reason to be disgusted at the season’s excess.

A prince in disguise…
Brett Virtanen, however, proves a lot steadier than his tipsy entrance. With a buoyant humor and a knack for giftwrap, Brett sparks her interest in the man behind the green polyester. But when Carrie’s ex returns with devastating results, it’ll take more magic than a costumed elf can conjure to make an ice princess once again believe in love. 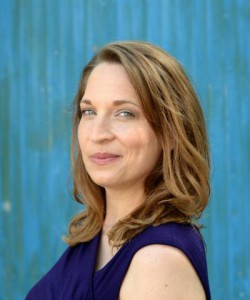 Jax Garren is the author of hot, urban paranormal romance like the Austin Immortals and the Tales of the Underlight. Though descended from Valkyries and Vikings (she’s part Swedish), Jax was raised a small town girl in the Texas Hill Country. She graduated from The University of Texas with a degree in English and a minor in Latin then found her own Happily Ever After with a handsome engineer who is saving the world through clean energy technology. Jax can be found at jaxgarren.com, at facebook.com/JaxGarren or on Twitter as @JCGarren. She loves meeting new people, so online or in person, make sure to give her a Viking Hail!

Don’t forget, Jax wants to know Pancakes, waffles, or french toast; which should Brett best use to tempt you? and she is picking her favorite comments to win first before any random drawings! To enter, leave a comment below. We’ll leave the contest open until at least noon Saturday. Make sure to leave your email or other contact so we can reach you if you win!